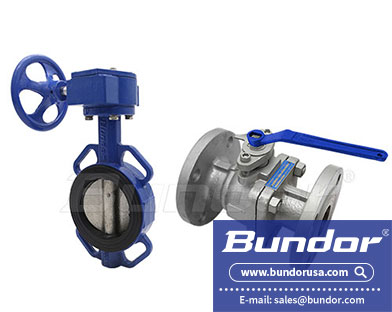 Advantages: (1) Simple structure, small volume, light weight, less consumables, used in large diameter valves;(2) the opening and closing fast, small flow resistance;(3) can be used in the medium with suspended solids, based on the strength of the sealing surface can also be used for powder and granular media.It is widely used in gas pipeline and water channel of metallurgy, light industry, electric power and petrochemical system.

Disadvantages: (1) the flow adjustment range is not large, when open up to 30%, the flow will be into more than 95%.(2) because of the limitation of butterfly valve's structure and sealing material should not be used in high temperature and high pressure in the pipeline system.General operating temperature below 300℃, PN40 below.(3) sealing performance relative to the ball valve, globe valve is poor, so used for sealing requirements are not very high.

Advantages: (1) Low flow resistance;(2) can realize fast opening and closing, some structure opening and closing time is only 0.05~0.1s, in order to ensure that it can be used in the automation system of the test bench.Quick opening and closing valve, no impact in operation.The spherical shutoff can be automatically positioned on the boundary position;The working medium is sealed on both sides reliably;(5) When fully open and fully closed, the sealing surface of the ball and seat is isolated from the medium, so the medium passing through the valve at high speed will not cause the erosion of the sealing surface;Compact structure and light weight, it can be considered to be the most reasonable valve structure for low temperature media system;

Disadvantages: because the ball valve seat sealing ring is the most important material is teflon, it is inert to almost all chemical substances, and has a small coefficient of friction, performance stability, not easy to aging, wide range of temperature application and sealing performance is good comprehensive characteristics.But the physical properties of ptfe, including high expansion coefficient, sensitivity of cold flow and poor heat conductivity, seating requirements of the design must revolve around these features.Therefore, when the sealing material becomes hard, the reliability of the sealing is damaged.Moreover, teflon has a low temperature resistance grade and can only be used under the condition of less than 180℃.Beyond this temperature, the sealing material will age.And under the condition of use for a long time, generally only in 120 ℃ is not used.

What are the characteristics of gate valves